The AN/ARC-174 radio system or commercially known as the 718U-( ) series, enjoyed very wide scale deployment in a number of applications. This included both aircraft and in several specific "fixed" or land mobile & marine applications. The Military version was known as the ARC-174 and was most commonly installed in military helicopters and some special use aircraft. The AN/ARC-174 was the unpressurized commercial version of the 718U-5 and used the 548S-4 100 Watt amplifier.

The system was designed to operated between 2.0000 MHz and 29.9999 Mhz for a total of 280,000 channels (100 Hz steps). The system could support a number of operating modes such as SSB (LSB and USB), AM, and CW. In addition, various data modes such as secure voice and low speed Data service (depending on the bandwidth of the 671 RT unit used [2.4 or 2.85 Khz]). There were a number of military implemenations that used data at 2400 bps. It was possible to use 39 tone and single tone modems (188-114A or B) and ALE operation (1G and 2G) depending on options installed. When using ALE, the 309 external ALE module (309L-3 for first generation and the 309M-1 for second generation) was required and a different control unit (514A-13) was used. Output power ranged from 100 watts up to 1 kilowatt with the average installation being about 100 (average or peak). The most common was 100 watt operation for Miliatry and 400 Watt for overwater commercial operation. Or in some limited cases such as the Boeing 747, the 400 watt versions of the amplifier were very popular (those with lots of spare DC power!). In one specific product application, the 671U-4 module was used as the exciter for a Collins 208U-10 10 KW Amplifier and the HF-8022 10 KW Amplifier. There were some unusual vehicle mounted versions also such as the AN/VRC-81 (see below) and the AN/VRC-114 series. There were a number of marine installation with the ALE option for the US Customs operations. The input power used was 28 VDC (@25 amps) for the basic 100 watt version. The 400 watt and the 1,000 versions used a variety of primary power options. The manual says the 400 watt version (using the 636X series power supply at 28 VDC) required a 150 amps which seems a bit crazy. The basic backage as a AN/ARC-174 was 33 lbs or about 14 Kilograms. A useful drawing of various modules within the 718U family we have found information is shown next. Further down the page is more detailed information on specific parts of the system. 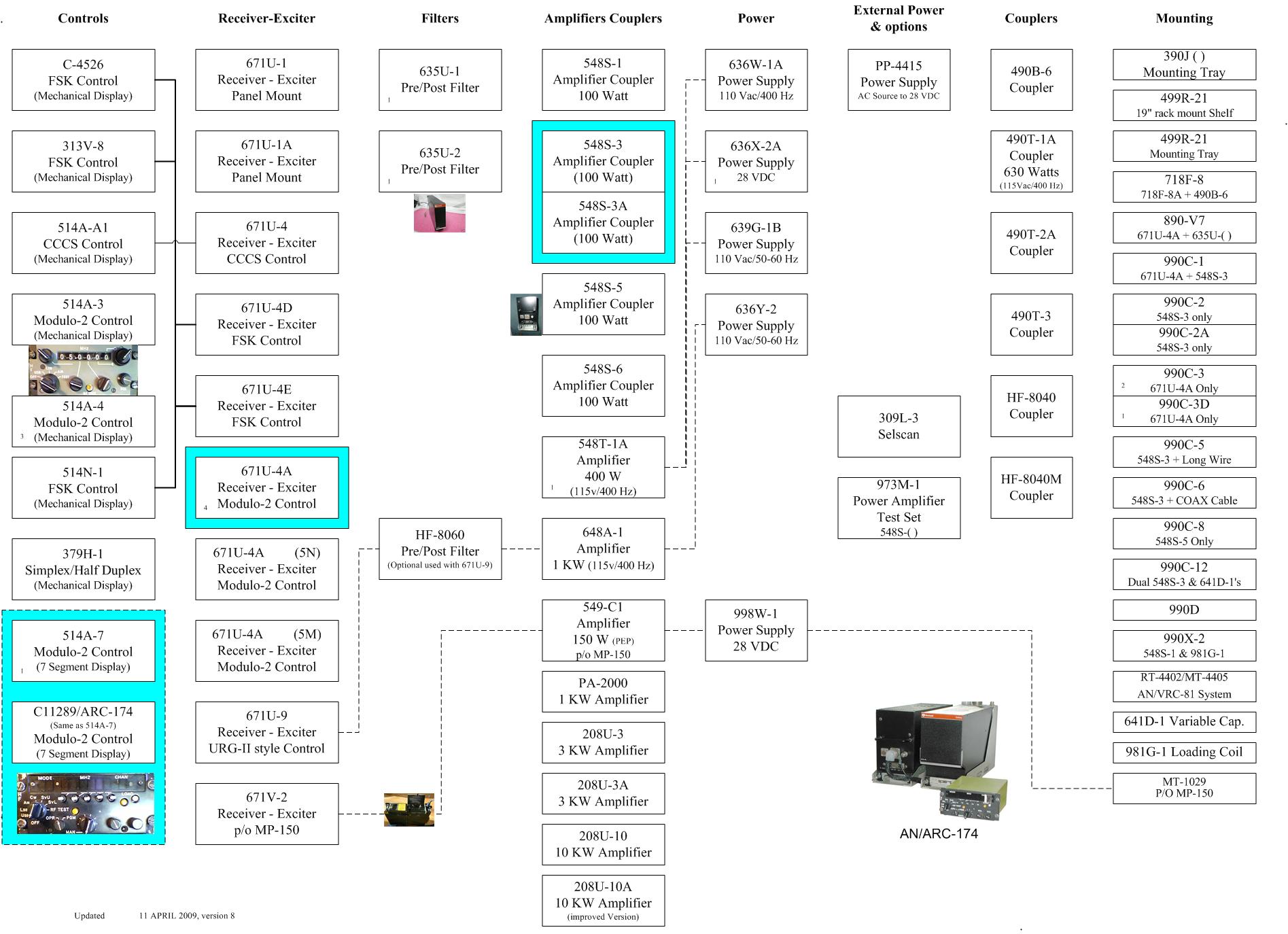 Note: there is an error on the coupler sectio of the drawingn. The image will be adjusted soon to show the information from below.

Some of the systems were later upgraded to support selective calling used by the airline transport companies ("SelCall" was 1G versions) and the United States military created the Automatic Link Establishment (ALE) capability. It should be noted that Collins was one of the key pioneers in this technology. The original Collins name for their solution was called "Selscan" which was basically ALE 1st Generation. The first generation ALE was primary used by the US Customs group.

The Harris RF organization also was big in the ALE area for the fixed, marine mobile HF community and their solution was called "Autolink" As expected, the systems could not interoperate. This was solved in the 2nd genration of ALE.

Within ALE 2nd Generation period, it all came together as one US Standard (see our section on ALE) and this work was later used by NATO for their HF deployments. The technology has since evolved to become a basic global standard used in all commercial and military applications. The main thing to remember about the 718 series was that it had a very successful life and is still in service in some fashion in nearly all airlines today and is still installed in many military aircraft around the world. It has had perhaps one of the most understated successful products within the Rockwell-Collins life. It was clearly crossing the gap between the commercial world and the military world. With one exception (the 548S-5), the product more or less has remained the same. It is only now, more than two decades later, is the equipment being phased out as the small component parts used to repair them are no longer being made (discrete transistors, etc.) The initial documents of the 718U (6 MB of TIFF 5.0 files) with more to come. The material gathered from the Maintenance document and other sources. An overview of the various variations is here. This radio is being replaced by the AN/ARC-220 series in order to support datalink (HFDL) requirements required by the commercial airline world as a backup to the existing Satellite and VHF based system. There are some images yet to be processed in the main directory under "unsorted" images that may be useful. See here The AN/ARC-174 or 718U family is made up of several key modules. These include: 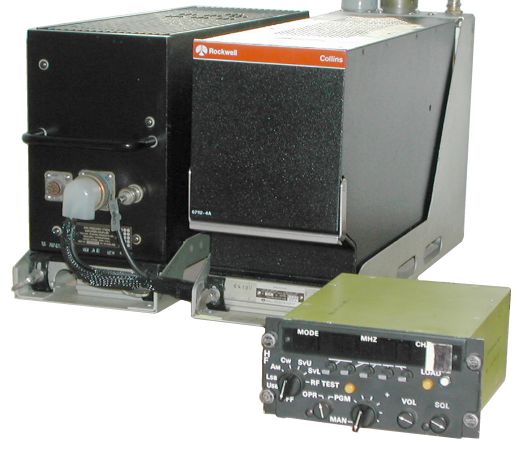 The next images of the AN/ARC-174 are from David Ross (SK) at Hypertools.com 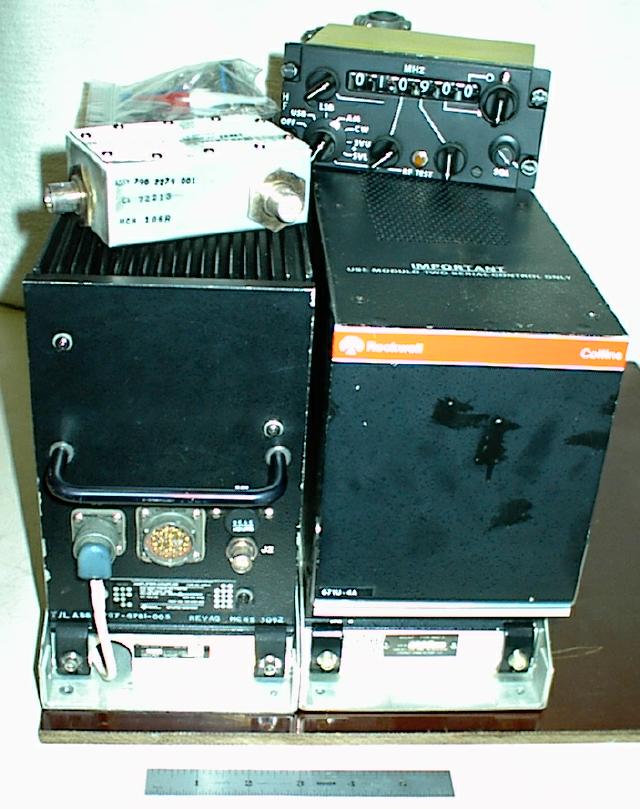 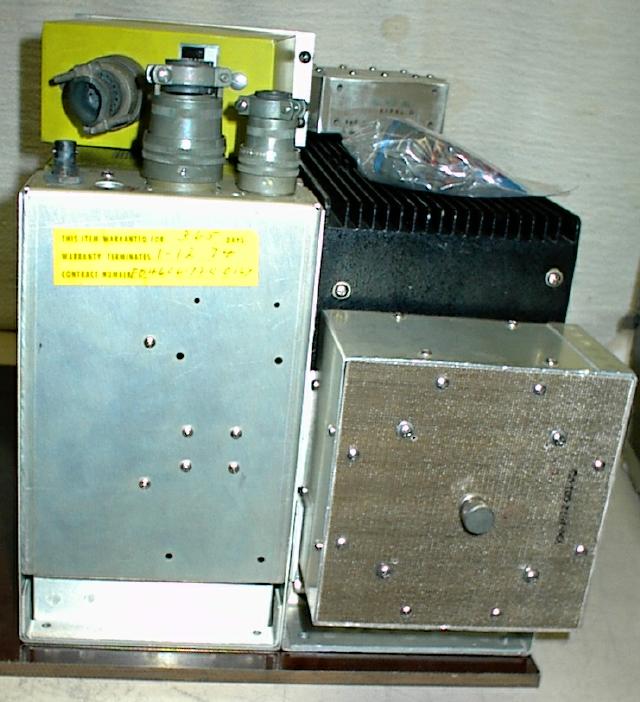 
Some information from the user's manual 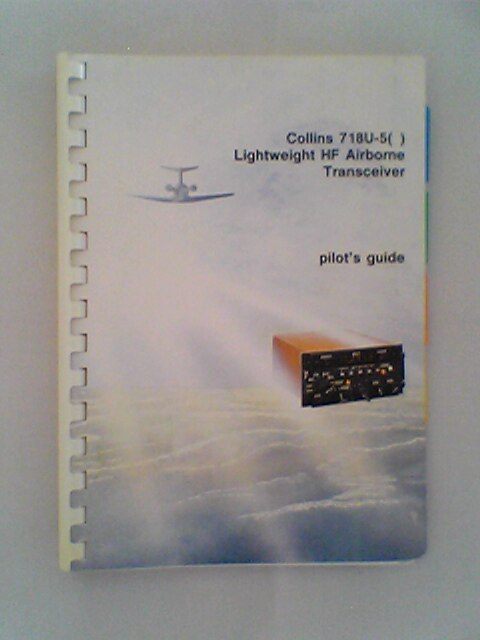 please contact us by sending us a mail at arc-174@cellmail.com!