The URG Story... (as we understand it) The basic concept of this portion of the web site is to show how we are restoring a Rockwell-Collins URG-II Radio System that was removed from a AN/TSC-60(V)2 trailer mounted High Frequency (HF) ground radio system. The Universal Radio Group or "URG" was a High Frequency radio communication solution provided by Rockwell-Collins from the early 1960's to the present. The URG system concept is currently beginning it fourth major generation. The AN/TSC-60(V) container system is now in its 11th Generation we are told (AN/TSC-60(V)11).

These are images of a (V) system: here. The images are from a shelter on the East Coast that an individual owns - sadly it is missing the Amplifiers.

We first obtained a basic but fully complete URG-II Receiver-Exciter system from Fair Radio in Lima, Ohio. It basically arrived well packed in 7 large boxes! Our understanding is that Fair Radio had obtained this material from a United States Government surplus sale in Sacramento, California (McClellan AFB perhaps). We think their original goal was to obtain the Collins RF power amplifiers from the AN/TSC-60(V)2, the 208U-3 systems, and resell them.

What we purchased was the two equipment shelves to hold the Receiver system, the Exciter system, and the Radio Control system (OK-145). The shelves came with all modules as well as the rack cabling harnesses. The control cables had been cut from the equipment cabinet to the internal shelter wiring but all connectors were present (we were lucky to get these!). In addition, Fair Radio sent the basic documention on the various Collins modules. Sadly, we did not get the documents on the Control system however. We also later purchased a few spare modules and a second OK-145 just in case. We found out as we got more into the project that this was a good thing as the TSC-60(V)2 actually used two of the OK-145 systems.

So why you ask, are we rebuilding a basic Rockwell-Collins URG-II system when any new HF radio will seem to have better performance as well as a lot lighter? Well first you need to know the history of the Rockwell-Collins URG family. (It should also be mentioned that many n Rockwell-Collins consider the URG-II receiver system one of the best built receivers in the last few decades.)

The Collins URG-1 and its control system and the next second generation series, the URG-II, was an expensive but very high perfomance HF system created by Rockwell-Collins Radio for the USAF and others during the early 1960's and 1970's to provide very high quality HF communication during the "cold war" period. The Univeral Radio Group II or also called "URG-II" (the system we have), was a second generation system that was all solid-state except for a motorized system in one specific module and for the 2-3 tubes (valves) used in the high power Power amplifier (3 and 10 KW). There were a couple of versions of the URG-II family that supported a lower power (400 watt and 1 Kilowatt) amplifier systems. These will be described later. The 208U-3 and the 208U-10 did use mechanical servos to do the tuning in the final amplifiers and thus, the tuning interval was about 6-10 seconds. This means this type of technology today would not be useful when using ALE due to the tuning time.

All URG systems were based on a series of "common" or universal equipment modules (hence the name of "URG"). This allowed the system designer to use these as "building blocks" to create a variety of project specific radio systems but with common hardware - thus reducing operating costs and time to market. This is a key point to remember. These types of radio systems are complex and required skilled support personnel and test systems to support the hardware. Thus, by reducing the types of modules to a group of about 15 or so, you could have a very effective support system in place to enable a wide range of radio technology. The same "common" modules were used in Aircraft systems and other fixed applications.

The individual modules in the URG-II series had very high performance and were based on the very effective engineering skills of the Collins team within Cedar Rapids, Iowa factory. There were related airbourne systems also such as the AN/ARC-132 and the later AN/ARC-174 series. It should be noted that much of the military technology was being used by the Airline Transport companies around the world due to the respect that people had for the high quality in the products.

Several of the URG-I (a few) and II (a few more) systems are still in use today. We are not aware of how many of the original URG-II systems still in operation however. What we have heard is that some may be operational is in South America and perhaps in the Middle Eas as we know some people are still maintaining them as the AN/ARC-165 series is still used in the AWAC aircraft. Somewhat simalar in nature as a "modular system" was the 718 series. The lightweight AN/ARC-174 series or the 718 series used for comemrcial applications (mobile, marine, and aviation), were all solid state except for the high power amplifier/antenna coupler. The lower power (100 watt) Amplifier/Antenna Coupler (aka known commercially as the 548S-3 or -5) was solid state except for the actual servo for the antenna coupler. The URG concept system was evolved with the technology based on the Collins HF-80 series and later upgraded again with the HFS-900 family. It is currently sold as the URG-III family. The current URG-III family is based on the RT-2200 series systems. You can see this latest generation at the Rockwell-Collins site here Please see this image from the Rockwell-Collins site: (image) or a local copy as they explain explain how the system works as a series of modules to created the desired system needed.

The URG-II family offered very high stability in fixed and transportable operations (such as the TSC-60). In many cases, it was used to provide voice and data services in a full duplex ISB environment across long transmission paths. In some applications such as Project Commando Escort (run by the USAF as part of the SIOP concept in the 1960-1970's), it provided communication support for command and control aircraft that were thousands of milles from a fixed location. The receiver systems were very hot receivers and offered very low frequency drift. The audio quality was very high as in some cases, there was data transmission being used and as these were 16 channel multiplex systems, frequency drift could not occur. It is very possible to add a 1 MHz external frequency reference if needed.

Phone patches were a very common event and as the users were normally very high ranking people, the voice quality had to be the best possible. In the period of 1969-71, I was colocated with a CE site and the technical team as well as the radio operations team provided high quality support for the various ABNCP efforts. In the 1.5 years I was indirectly involved with the CE network, I can not remember any failures. I do remember helping the Ground Radio people change the PA tubes at times. A 4CX5000 or a 4CX10,000 was a BIG tube!

So the basic question arises, is it worth the effort to make a complex +35 year old system come back to life?

So does the US Military still see value in the basic concept of the AN/TSC-60 system element? Yes. In a recent search on Google, I saw this article that might be interesting: Joint Force Commander Communication System. The US Military test site also uses a AN/TSC-60 as a means to test HF Technology. See this link to their page: JITC. It is still even taught in their USAF school in Mississippi (Kessler AFB - I have fond memories of this place). See the course description: AN/TSC-60(V)9 Class

Various pictures of the URG-II family

Rockwell-Collins equipment cabinet with the Receiver Shelf (top), the Exciter Shelf (middle), and the OK-145 remote control system (bottom). The Receiver shelf had more modules in it than the Exciter shelf. Picture was provided by the technical team at BM-Japan.

The URG-II control system
More to add here - we have a lot of material - just need to sort it out!

The URG-II remote control system - OK-145 and is also known as C8376/TSC-60(V)2. It is capable of being fully remote located with nearly unlimited distance assuming audio levels are maintained. It is designed to be installed in a 19" rack or in a console where the operator could control it. We have fond memories of replacing the model 327 lamps in it when we were maintaining these systems (1969-71).

Wiring data and other misc information is 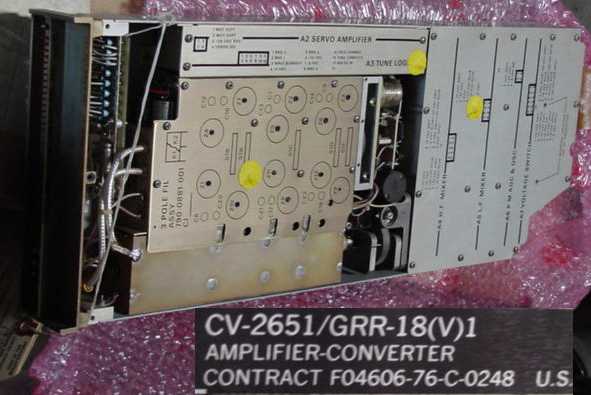 There was also an extensive line of test equipment created to support the URG-II family. Here is a manual of the related test equipment and fitures. Please note that this is a BIG (33 MB) download. Also, please note the copyright is held by Rockwell Collins. Please click here for it.

Collins 208U3 3 KW Power Amplifier. This is a view of an off-line U3 Amplifier with the front door open. Note the HV shorting stick on the door. This is really required to prevent harm to the technician when servicing a high voltage system such as this amplifier. These stations used 3 phase power - generally 208 but could be configured for 380 volt operation also. These are NOT recommended for home use unless you need a heater for your house. In addition, once mechanically alighed, they worked well but keeping them in good mechanical condition was not always a fun task. The ratings were conservative. It was easy to obtain far more than 3 KW or 10KW from the amplifier but tube life did drop off. There were two versions of the 208U3, the original model and the much improved "A" version. 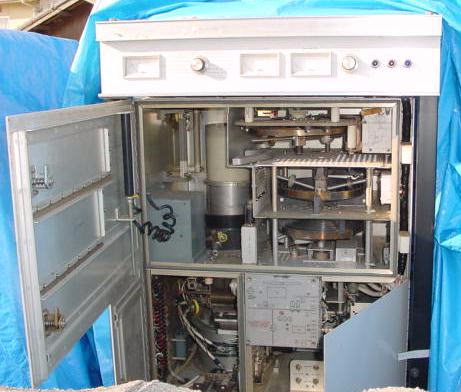 Main Menu or Basic capabilities of the URG-II Receiver-Exciter System
To offer us additional help on this site, please contact us by sending us a mail at tsc-60@cellmail.com!